Since it’s the first Sunday of the month, we’ll be continuing the Bethany House Fiction tradition of taking time to pray for authors who have new releases coming out this month. I’m Amy Green, the fiction publicist here, and I’m thankful for all of the readers who show their support for our authors in the way that matters most: by praying for them. To read more about the reasons behind this time of prayer, go to this post.

Authors with Books Releasing in July:

Verse of the Month: Feel free to use the text of this verse to guide your prayers for these authors, as well as other people in your life who you want to remember in prayer today.

“Come to me, all you who are weary and burdened, and I will give you rest. Take my yoke upon you and learn from me, for I am gentle and humble in heart, and you will find rest for your souls.” Matthew 11:28-29, NIV

Thank you so much for joining us as we remember these authors in prayer. Let’s pray that these stories (that contain the Story of the gospel) reach many people.

(Don’t forget to check last week’s post to see if you were a winner!)

They never make the cover. Sometimes we don’t hear what happens to them at the end of the book. And they may not be quite as heroic as the main characters. But I would argue that a cast of strong secondary characters is what makes the difference between a good story and a great one.

As I read our July releases, I was struck by the delightful characters surrounding the hero and leading lady. Here are a few of my personal favorites.

A Match of Wits
by Jen Turano 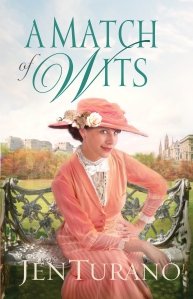 Why: Whether he’s being cryptic about his first name, delivering dry one-liners, or taunting our hero in an attempt to get him to admit his affection for Agatha, this solid, stoic bodyguard is full of surprises. Someone’s got to tell the heroine to stay away from the dynamite, and Blackheart is just the man for the job.

Quote from the Book:
Blackheart: I don’t have feelings for Miss Watson.

Zayne: Everyone has feelings for Agatha. She’s very beautiful, and you have to admit, life would never be boring with her by your side.

Conflict. It’s what makes readers keep turning pages late into the night, and what helps writers know what to put on the page next. Some conflicts are fairly obvious: blizzards, runaway trains, or moustache-twirling villains are pretty easy to identify as the enemy.

But what happens when your real enemy is . . . you?

That’s what writers call internal conflict, and it can be subtle.

As I read this month’s releases from Bethany House, I noticed that all of the main characters had a great story arc involving internal conflict. Yes, things are happening outside of them: a mistaken identity, hostage negotiation, impending murder, and blackmail. But what really drew me into the story were the unique and nuanced issues that each character faced. Here, the authors and I talk about the characters’ internal conflicts. 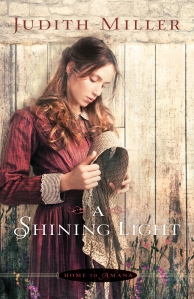 To learn more about Judith and her books, go to judithmccoymiller.com.

Andrea Wilson
From A Shining Light by Judith Miller

Judith’s Take: For several years Andrea Wilson faced the consequences of a bad choice. A choice that destroyed her trust. Now, unexpected events have thrust her into life among the Amana Colonists in Iowa. If she is to ever find the peace, safety, and love she desires, she must learn to trust God as well as the people who have given her shelter. When trust proves more difficult than she anticipated, she must decide if she will rely upon her own understanding or finally trust God.

Amy’s Take: Sometimes communities like Amana are so peaceful that they seem far away from the problems of the outside world. When Andrea brought some of those problems into Amana, I loved watching how the people there loved and protected her. Sometimes trust doesn’t come easily, and I appreciated the realistic way Andrea struggled with that. END_OF_DOCUMENT_TOKEN_TO_BE_REPLACED

Some of my very best childhood memories are about times I spent at my grandparents’ house. My mother’s parents, as well as all but one of her siblings and their kids, lived in the Dallas area when I was growing up, and we saw each other for almost every holiday and during the summer. Most of the time we spent together, we were at Grandma’s house. 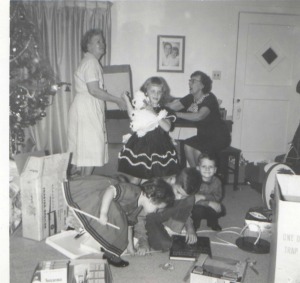 Grandma came from a time when women did not usually hold jobs, especially after they were married, but you could never say that Grandma didn’t work. She was raised on a small Texas farm, very close to where I live now, where they had few conveniences and manual labor was the order of the day. I don’t remember ever thinking about it much when I was growing up, but now I look back and wonder how in the world she ever got everything done.

She never drove a car, not even once, so if she needed something from the store when Grandpa was at work, she walked. She didn’t have a washing machine or dryer until she was in her late sixties, but she did all the family laundry herself. Her house was always neat and tidy, except for when we twelve cousins got together and made a shambles of the place. Except for the mowing, she did all the yard work, including raising and crossbreeding prizewinning irises, along with an abundance of other flowers. She never had a microwave, and frozen dinners and pretty much any kind of pre-made food were taboo in her opinion, so she cooked everything from scratch, and there was always a feast on the table. And that was just on an average day. 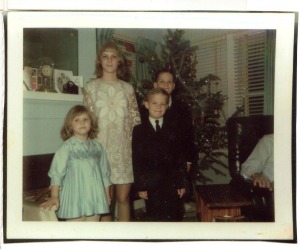 At Christmas, there were usually thirty to forty people to feed and entertain. We always had two tables set up: the “big table” for the grown-ups and the older kids, and the “little table” for the younger ones. Of course we were all crammed together in Grandma’s dining room around a mountain of delicious food, usually roast turkey with gravy and corn-bread dressing, a variety of vegetables and casseroles and, best of all, homemade candies and pies with Grandma’s lighter-than-air crust. END_OF_DOCUMENT_TOKEN_TO_BE_REPLACED