I don’t know about you, but I love a novel that will keep me turning pages with all of its twists and turns. And as the fiction publicist here at Bethany House, I get to work with several of the authors who create those types of books, and they’re joining us on the blog today! 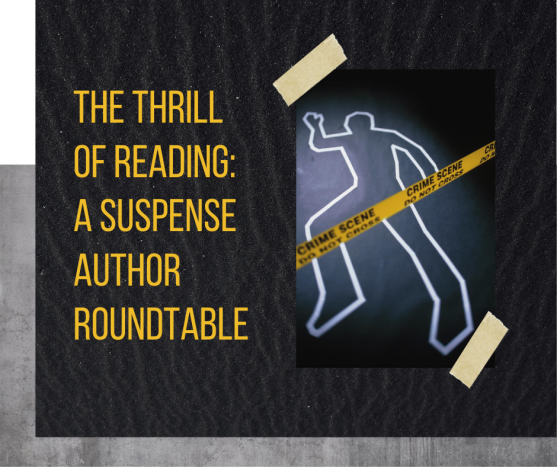 Several of our Bethany House suspense writers are here to share details about their inspiration and research so you can learn more about what it takes to get those page-turning plots to you.

Amy: Why do you think readers enjoy reading about criminal investigations, perilous chase scenes, and high-stakes drama that they wouldn’t want to be involved with in real life? And why do you enjoy writing it?

Susan Sleeman: I think readers like these kinds of books for two reasons. One, they’d like to think of themselves as the hero or heroine, being brave enough to withstand the attacks and smart enough to outfox the bad guy. And two, they like the fast pace and excitement in these books. And they like to be a bit scared by the events, sort of like riding a roller coaster. You know you are safe, but the ride raises your adrenaline, and you like the feeling.

I write in this genre for the same reasons I think readers like to read them. I want to think of myself as being brave, but in reality, I’m a big chicken. I like the adrenaline rush too. But also, I’m fascinated with forensics and police procedures, so I love doing the research and learning new things in that area. Also, I attended the FBI’s citizens academy and several local police citizens academy, and when I saw the agents’ and officers’ hearts for helping people, I was hooked on writing in this genre to portray law enforcement officers as the genuine helpers that they are.

Amy: Tell us a little bit about your main character in your most recent novel. Any desire to move into crime-fighting yourself?

Rachel: Layla Karam works at the CIA as a Middle East analyst, but those in charge at the Agency believe Layla would be a better asset if she was a CIA officer working in the field. Even though she resists, she takes on the challenges because she believes she is serving her country.

Fun fact, Layla got her undergraduate degree in Arab studies, and I got my Master’s degree in Middle Eastern studies. I poured a lot of myself into Layla’s character, but I could never take on dangerous field missions like her. I’m much better sitting behind my computer writing about them!

First Lines of Backlash: “The incessant knocking on her condo door made Layla Karam grumble as she threw off the covers. She had no idea who would be so insistent—especially at two in the morning. Over five years at the CIA had made her cautious, so she grabbed her gun from the nightstand and went to the door, ready for anything.”

Amy: Your latest series has a lot of complexity. What is something you think readers would find interesting about the challenges you faced in writing the Kaely Quinn Profiler novels?

Nancy Mehl: I’ve never worked with a character quite like Kaely before—the daughter of a serial killer who grows up to be a behavioral analyst for the FBI. She certainly comes with a boatload of emotional hang-ups!

But I’d also say it was extremely tough to write about the FBI. I’m so blessed to work with a retired FBI agent who actually worked in the BAU (Behavioral Analysis Unit). You would think that would make things easier. Uh, no. In my first drafts, I had so many things wrong. I actually rewrote the beginning of Mind Games, the first book in the series, three times because my FBI source told me my premise wouldn’t work. I’m sure I tried her patience more than once, but we got it done. I couldn’t have written the book without her.

First Lines of Dead End: “Norman Webber offered his wife a tight smile as he dealt with yet another one of her awful presents. He felt like a fool walking back and forth in this abandoned rail yard.”

Amy: Tell us a little bit about your latest series and what inspired you to chose the characters you did.

Dani Pettrey: The Coastal Guardians series features a team of Coast Guard Investigative Service agents. Each book features a different member of the team. Before I started researching, I had no idea the CGIS existed, but while researching the Coast Guard in general, I found cases the CGIS had worked and solved. I was fascinated and decided to write a series about the men and women who pursue justice for a living. I hope readers will enjoy getting to know the whole team.

First Line of The Crushing Depths: “Greg Barnes clinked along the grated metal steps, his boot heels rasping with each shuffle as he headed topside for a much-needed breath of smoke. Thrusting the door open with a resounding creak, he stepped out into the night air. A litany of protestors’ chants mimicked the shrill whining of cicadas.”

Amy: What do you feel like characterizes your series? Why do readers keep coming back for more?

Ronie Kendig: In the twenty-plus books I’ve written, I’ve found that readers—and I—really love the team dynamic, the camaraderie and the relationships. It takes a lot of effort, more than when I wrote a regular cast of characters, but I love it because it brings depth to the story that otherwise isn’t there. It also affords an opportunity for diversity, humor, and impact that I find easier to imbue in a story through that team dynamic.

I’ve also written interconnected threads across the series in several of my series to date. The most difficult thing is to pull all those moving parts together in the end to create a satisfying but not cliché, everyone-lives-happily-ever-after conclusion.

First Lines of Kings Falling: “Being hunted by the monsters she had created was a horrifying, well-deserved death. God forgive her for the terrible things she’d done, but it had been for good. For the good of all humankind. Only it hadn’t turned out … good.”

Amy: You mention on your website that you write “suspense stained by history’s secrets.” What does this mean?

Jaime Jo Wright: I created that phrase when I was repeatedly asked what I wrote, and when I answered “suspense,” I received questions about the FBI, police, murder investigations, and so on. So I wanted to define that my stories are far more vintage in nature, and that while there are present-day mysteries and suspense stories, they’re all very stained and saturated with the secrets of the past.

First Lines of The Haunting at Bonaventure Circus: “Life was not unlike the wisp of fog that curled around the base of a grave marker, softly caressing the marble before dissolving into the violet shadows of the night. There was a sweetness in its bitter that left an aftertaste, a vision, a moment of wonderment.”

One thought on “The Thrill of Reading: A Suspense Author Roundtable”