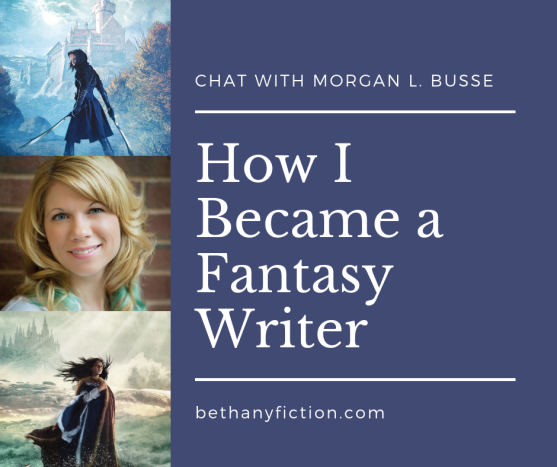 Almost every writer I’ve met said they wanted to be a writer since they were young. At age six, I wanted to be a unicorn. A beautiful, magical unicorn. That should tell you where my life was heading from an early start.

My earliest book memories were my mother reading to us the children’s version of Pilgrim’s Progress and The Chronicles of Narnia. In fact, I couldn’t wait until the next night to find out what happened to the Pevensie siblings, so I found my mother’s copy and hid in a corner and finished it that afternoon.

As the years went by, I added more fantasy to my collection, starting with The Hobbit and Lord of the Rings. My father was a fantasy nerd before it was cool and introduced me to even more stories: Dune, Conan, A Princess of Mars, and many others. When I wasn’t reading, I was imagining. So it’s no surprise that eventually I started writing my own stories.

In 2004, shortly after the birth of my daughter, I needed a creative outlet. My husband always said I should be a writer. I usually turned him down. I was a reader, not a writer. But then I had this idea and I couldn’t escape it. I started writing about this woman who could see inside people’s souls with a touch of her hand. Using the fantasy genre, I explored what it would be like if we could see people the way God sees people: both the good, the bad, and the ugly.

Years later, that story became my first published book: Daughter of Light. Since then, I’ve continued to write in the speculative genre. I always thought the Frankenstein story was a great story about how we should be careful of what we invent, and how the monster wanted to be loved. So I wrote a similar story about a young woman who—because of science—is turning into a monster from the inside out using a unique genre called steampunk (steampunk is a story set in a Victorian or Wild West era with a high level of technology ran on steam). A year later, Tainted came out, which won the Realm Award for best steampunk and Awakened, the following book, won the Carol Award for best Christian speculative.

It took years for me to embrace the fact that I love fantasy, and that there is nothing wrong with that genre. In fact, the next generation is desperately looking for something beyond our world. Just look at the books and movies young people read and watch. And what better way to introduce them to God (who is the most fantastical!), than with stories set in amazing worlds, filled with flawed and searching people, who find light and hope.

Along with writing fantasy, I attend an amazing conference every year for writers of faith who write specifically in the fantasy and science fiction genres, Realm Makers. It’s probably the only writing conference where you will find people walking around in geeky shirts, debating the eating habits of dragons, and dressing up as their favorite characters for the awards banquet. I have a steampunk outfit I wear especially for the occasion. It’s one of the highlights of my year!

Looking back, I never did become a unicorn. Instead, I became a fantasy writer. Which is almost the same thing. Then again, those silver hairs I see starting to peek out at the top of my head could be an indication that my dream just might be coming true.

Thanks so much for sharing your story with us, Morgan! Readers, you can check out the first chapter of Mark of the Raven, or visit Morgan’s website for more about her and her books. What is a favorite character from a fantasy novel you’ve read?

5 thoughts on “How I Became a Fantasy Writer”