I don’t know about you, but I’m being hit hard with travel ads—it’s the time of year when you’re just about done with the blahs of winter and ready to think about summer vacations. Here at the Bethany House office, where we just hit a February snowfall record, it can be hard to get rid of that pesky cabin fever…which is why taking a book vacation is the perfect solution.

In choosing these deluxe vacation packages for you, I particularly looked at books set outside the U.S. Since international flights are expensive, here’s a cheaper way to see the sights…and have a guaranteed adventure. Click on each cover to read an excerpt (kind of like a travel brochure), and read on for a little glimpse of each setting.

One: Flee from Danger in Moscow with Thirst of Steel 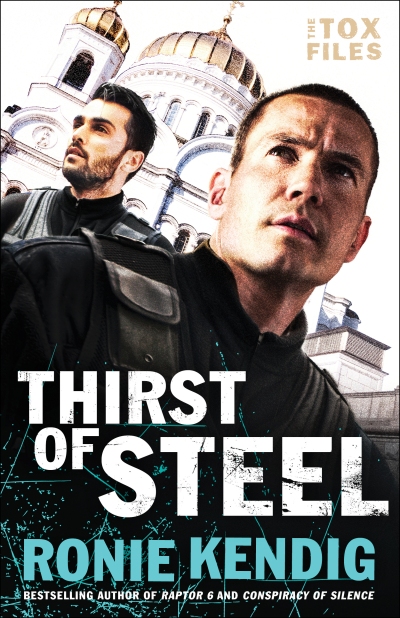 The Tox Files series travels all over the world—in Thirst of Steel alone, I counted Ukraine, France, Republic of the Congo, London, and Israel, and there were probably others that I missed. It’s not exactly a charming world tour, though…most of our characters are actively hunting or being hunted the whole time and a few steps from death at every turn.

Even when Ronie does describe famous landmarks, she manages to make them feel threatening, like this excerpt, set in Russia.

The tower grew as she closed the distance, until finally the glittering white cathedral glared at her. The cobbled foot bridge summoned her across the Moscow River and into the sanctuary. . . .

Crossing the footbridge with its evenly spaced lamps made Tzivia feel exposed. Surely they wouldn’t attack here on the cathedral steps. . . .

Quickly, she stepped inside. She wobbled, momentarily taken aback by the enormity of the cathedral and its lavish, brightly colored stained glass. She might not understand religious fervor, but she could appreciate the beauty of cathedrals. Just as she had reveled in the beauty of archaeological finds. Like the one she’d hidden before this fateful errand.

You know there’s bound to be trouble here. (Not-really-a-spoiler: there is. Just a few paragraphs later.)

Two: Tour Paris in Springtime (and Wartime) with Far Side of the Sea

This WWI spy story travels to locales like Barcelona, Spain, but we start off in Paris in Far Side of the Sea‘s opening. Again, you notice Kate’s contrast of the lovely landmarks you might see on any tour of the city with some details that remind us that we’re not here for sightseeing; we’re on a mission.

A small cluster of soldiers stood in front of the opera house, Americans by their appearance. Pausing to admire the ornately majestic Palais Garnier, they finally moved on, doffing their hats to a pair of matrons who waved them to come over and view their carts full of pink roses, white lilies, and yellow daffodils. Adjacent to the flower sellers, an outdoor market pulsed with activity as women, most clad in mourning black, carried wicker hampers and made their selections from the remains of the morning’s produce. . . .

His gaze swept back along the opposite end of the street, colliding with the gutted shell of what remained of a multistoried stone building. He’d seen the structure upon his arrival at the hotel, one wall still poised drunkenly beside an enormous pile of rubble while shredded curtains billowed through blown-out windows in the light spring breeze. With such normal activity only yards away, the evidence of war seemed bizarre . . . and a glaring reminder of the shells that regularly hammered the city.

Then, later we get past Paris and can enjoy the scenic countryside instead:

At the Arc de Triomphe de l’Étoile, sandbags reinforced the arch against attack. He’d noticed other Paris monuments being protected in the same way.

Beyond the arch, they continued on toward Nanterre and Poissy, leaving behind Paris and her damaged extremities for the more rural farmlands of France. Verdant fields rolled out before them, punctuated with white daisies and red poppies, while cottages with orange terra cotta roofs sprouted among the green. The occasional château could be seen rising among gentle rolling hills, the manors accessible by narrow dirt drives and, unlike Paris, lined with flourishing oaks, maples, and yellow mimosas.

Sound beautiful, doesn’t it? Well, things aren’t all poppies and cottages for long, but it’s nice to get glimpses along the way.

Three: Escape to the West Indies with Keturah

And for something completely different, Keturah (and the rest of the series) is set on the island of Nevis during colonial times. While the island has its share of perils and dangers for three young women alone, the reader also gets to see its exotic beauty.

“After the endless day at sea, it felt like a strange dream as they were finally approaching Nevis. The sailors cheered when one in the crow’s nest that morning shouted, ‘Land ho!’ So did the passengers, all rushing to the deck to peer out at the horizon as the West Indies came into view—as one welcome, glorious green dot after another amid the blue sea.”

When Keturah and her sisters journey to their family’s plantation for the first time, they get a better look at the island up close.

“The road was lined with flowering trees that towered above them and granted them partial shade. There were magnolia and African tulip and pouri trees, all of which she recognized from studying Gray’s illustrated book Agriculture Among the Indies, and below were West Indian ebony bushes. The jungle was alight with bright vermilion, yellow, and red blossoms. She inhaled deeply and detected a mix of jasmine and other sweet scents on the air. Among the trees that lined the road were also fruit trees—mango and guava and palms loaded with coconut. . . .

Between the trees they caught glimpses of the ocean below with its different hues of turquoise, deep green, and royal blue. On either side of the road was nothing but acre upon acre of sugarcane, long stalks of green rustling in the trade winds.”

The exotic descriptions make Keturah and her well-bred sisters stand out as being very far from home and out of place. But can’t you just smell that coconut?

There you have it…three amazing journeys that you can take without ever leaving your home (except maybe to go to a bookstore or library). I hope you’re able to beat the winter blues with a good book this week!

What’s a place you’ve only ever traveled to in the pages of a book?