Today’s Ask Bethany House will take us back to the past: “Who has worked for Bethany House the longest? What are their favorite things they have learned since working there? What kind of change have they seen?”

I love this question because it doubles as an answer to another question we received: “What do you think is an aspect of publishing that most people don’t know about?”

With that in mind…meet Randy Benbow! 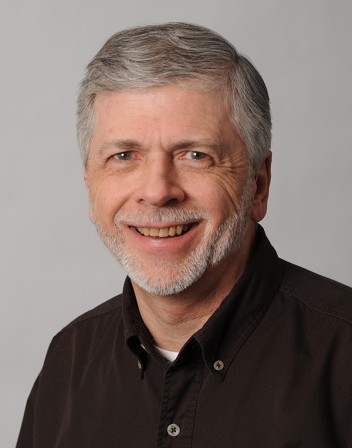 If you count years at Bethany House itself, Jim Parrish, our executive VP, has been here longer, but Randy worked in the pre-press department of the print shop that created books and other materials for the missions organization that started Bethany House, back in the 1970s.

His job in the production department of Bethany House started in 1993. What does that mean? Basically, Randy’s job involves all of the unseen technical details that get a book into your hands and keep us running: printing “proof” covers to make sure they’ll look great on the final books, backing up and archiving our files and covers, sending the printers what they need to roll out books and deliver them to bookstores and libraries all over the world, and more.

I asked him a few questions to learn about his job (and had to find definitions for some terms, meaning even I don’t know all of what Randy does). Enjoy!

Amy: Tell us a little bit about how your job has changed over twenty-five years.

Randy: One of my favorite things working at Bethany House is actually looking back…and marveling at how computer hardware and software has improved over the past twenty-five years. When I started working here November 1993 our typesetting system was totally code-driven. My workstation also had an Apple Macintosh Classic II with a teeny-weeny little screen tethered to a larger 22” black-and-white monitor to create…

(Can you guess what task might have been so important to be automated that it was done on one of four computers at Bethany House?)

Barcodes! I still create all our barcodes, but it’s a much easier and faster process now (with a bigger screen).

Another task I took on we found we needed was on-site Mac tech support as well as managing a stack of 3-4 hard drives cabled together for our primitive beginnings of a file server—running software utilities (sometimes before they arrived in the mornings, or after the designers left in the evenings), managing backups and archiving our Mac files. Ah yes, those were the days—slow, expensive, inconsistently stable Macs.

Amy: Wow, I can’t imagine doing any production or design work without computers. I’ve seen some of Dan’s original cover paintings around the office. It’s amazing how much work he put into them, although I can see how it would also be much harder to make tweaks and changes like we can now in Photoshop.

What was the most involved process that now no longer takes a lot of time because of technology?

Randy: Typesetting—formatting files for the interior of a book so it can be printed—is very different than it was when I started out. Covers and ads used to involve processing film, while paper for book text involved being pasted in a layout, then photographed. Since I’d had quite a few years’ experience maintaining a film processor for Bethany’s Graphic Arts camera, I processed the film and paper outputs, monitoring and maintaining its chemicals, cleaning as needed.

Now typesetting is done on large screened Macs in Grand Rapids to digital files; no light-sensitive film, no chemicals. Instead of transferring files via “SneakerNet” (by walking or mailing), floppy disks, or larger capacity disks and drives, files are transferred to and from designers, coworkers, foreign or domestic Subsidiary Rights vendors, and book printers via email (if they’re small enough), or Dropbox-like links or other transfer systems if they’re larger.

Amy: I can’t imagine walking files around and the extra time that would take.

What’s a recent experience you’ve really appreciated about your job?

Last February 2018 I was blessed to have the opportunity to visit our parent company Baker Publishing Group’s home office in Grand Rapids, Michigan. I got to meet and personally talk to the people I’d been emailing for fifteen years! They were so hospitable, gracious, warm and kind! While conversing with them, seeing their facilities, faces, and workstations, I found we had many things in common at work as well as in our personal lives, which gave me more satisfaction in my job knowing who I work with “on the other side of the pond.” It was great—I loved it!

Just a favorite joke of mine…do you know why there are RUSH jobs in the printing industry? Back in the day when Gutenberg invented the first printing press with moveable type, his first customer kept the proof over the weekend… <sigh> and they’ve been behind ever since.

Thanks, Randy! How about you, readers? What’s one technological advancement in the past twenty-five years that has changed your life for the better? (Mine would definitely be GPS…)

3 thoughts on “Ask BHP: How Has Bethany House Changed Over the Years?”