First of all, thanks so much to everyone who participated in our Ask BHP survey! (You can still add your questions, but the giveaway winner has already been picked.)

There have been so many intriguing questions submitted already, including several I’m especially excited to investigate…because I have no idea what the answer might be! 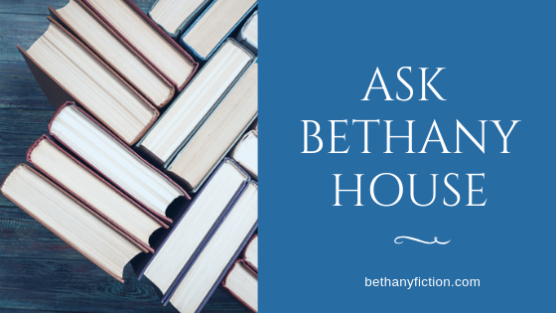 This month, we’re pulling out a technical question, one that you may have wondered if you’ve noticed the difference in spine widths along your bookshelf: “Who decides how long a book gets to be? I know some books are longer than others, so who decides, and how do they decide on the length?”

When an author creates a book proposal, they often give the approximate word count of their novel. Debut authors—authors who have never published a novel before—almost always have a complete manuscript, so even if some editing might be needed, the word count is pretty easy to figure out. Authors who have published before, however, sometimes only have a few sample chapters and an outline…which they may or may not follow closely, so their word counts are more hypothetical. You can think of the estimated word count as the general goal the author is aiming for. It’s usually phrased something like: “90,000 words plus or minus 15%,” so it’s not a strict amount.

As far as why the number is chosen, the average length of one of our novels is in the 80,000-100,000-word range. There are some slight preferences—contemporary romance tends to be closer to the 80,000-word mark, some historicals will be more likely to creep toward 100,000 or beyond—but that’s a good general estimate to keep in mind.

One major exception is epic fantasy, which tends to be much longer…after all, the authors have to build an entire world and then introduce a threat that could end the entire world. According to our editors, the conclusion to Jill Williamson’s Kinsman Chronicles, King’s War, set a new fiction length record: 656 pages and 222,000 words total, more than double our typical novel size!

Bethany House doesn’t currently publish children’s books, but of course every target age group within that industry has a different ideal word count, and even sentence length, based on reading level. (Along with those few Harry-Potter-like exceptions that defy length norms.) Mass market fiction and novellas have conventions as well.

As far as getting to that word count, some authors will “write long”—let their first draft go wild with subplots, long descriptions, backstory dumps, and other words that will be eliminated the second time they go through their manuscript. A few authors purposefully write scenes that they know will need to be cut or at least shortened later to keep the momentum of the story flowing, while others only decide in the editing process what might need to be trimmed. This gets them back down to the word count they’re aiming for.

The other camp is made up of those who “write short”—telling the basics of the story to get it out on paper, then going back and adding fun character details, smoother transitions, and additional tension-building scenes after they have a draft. The most minimalist will basically create a detailed, fifty-page outline for their first draft, but others will only be a few thousand words short that they then sprinkle throughout to make the story more vivid. This gets them up to the word count they’re aiming for.

There are always exceptions to word count goals, where authors start writing and realize they just can’t tell the story they’re trying to tell in the word count they decided on in earlier. (This seems to happen more commonly than authors who decide their book needs to be much shorter than they’d planned.) At that point, they talk with their editor to create a new word count estimate. If an editor reads a 120,000 word manuscript and decides, “A lot of these scenes don’t advance the plot,” they’ll suggest edits to get the word count down to the target amount.

But sometimes an editor reads a 127,000 word manuscript and decides that nearly everything is essential…which is what happened with A Refuge Assured by Jocelyn Green. Jocelyn explained it this way: “My first draft is usually between 100,000 and 110,000 words. But then, as we flesh out character development and subplot threads, I always end up adding more to the novel. I do delete entire chapters that weren’t necessary during that process, but what I add to the book always outweighs what I strike out. Dave and Jessica [Jocelyn’s editors] say that as long as the book doesn’t lag, and as long as every scene is necessary, they don’t mind the length. What we don’t want is an underdeveloped storyline or an abrupt ending, just to squeeze in the last chapter before hitting a certain word count.”

So there you have it! Word counts aren’t magical, but neither are they an exact science. Authors and publishers both want to make sure there’s enough space to tell a good story…without giving too much space for meandering.

What’s the longest book you can remember reading? How about a book you wish could be longer because you love the characters so much?

4 thoughts on “Ask BHP: How Do You Determine Book Lengths?”