(When I saw Regina’s fun travel album on Facebook, I knew she had to share the fun with all of us here on the blog. Enjoy!) 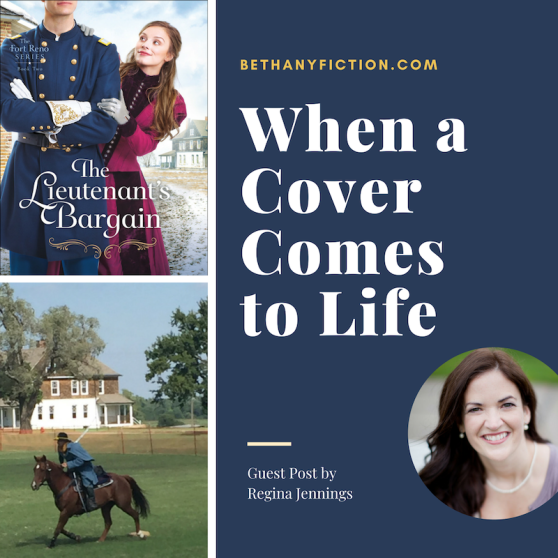 The wonder of reading a well-written historical novel is that feeling that we’ve stepped into a world that now only exists in the pages of a book. Then again, sometimes history is resurrected, and it’s just as glorious as you’d hoped.

In late September, the U.S. Cavalry Association held their Bivouac and National Cavalry Competition at Fort Reno, Oklahoma—the setting of my current series. Once again, the fort sounded with pounding hooves, stirring bugles, and that bluster and swagger that occurs before any contest. Now, I’m always supportive of events that honor our past, but this was at the fort…my fort! It was like I was standing beside Louisa and Major Adams watching the goings-on at the parade grounds.

In Holding the Fort, most of the story takes place in the General’s House, which was the residence of the highest-ranking officer on the post. The General’s House had a central view of the parade grounds where the men drilled. 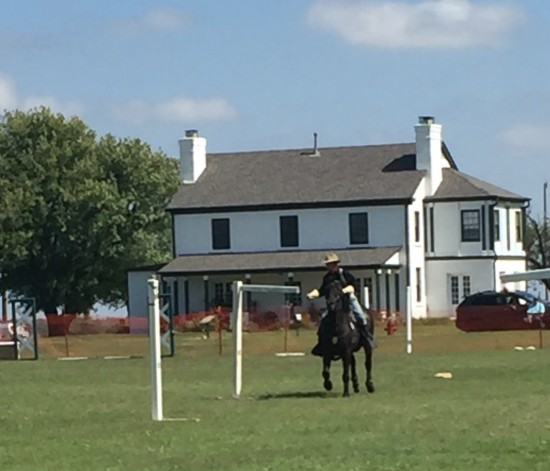 Here, in front of the General’s House, a participant competes in the Mounted Saber competition. The obstacle course includes spearing rings on the blade, slicing through apples, popping balloons and stabbing targets on the ground.

Another competition was Military Field Jumping. Behind this soldier you can see the long barracks that the troopers like Bradley Willis stayed in. 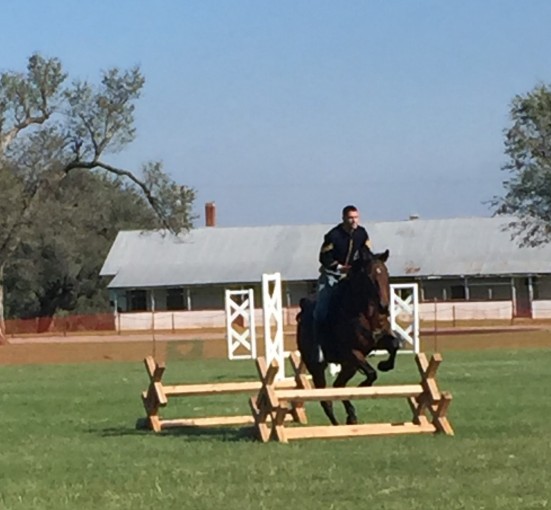 Besides combat horsemanship, mounted sabers, and military field jumping, they were also judged on the authenticity of the era they were portraying. Participants had several different categories that they could choose from. Naturally, I was drawn to those portraying soldiers from the Plains Indian Campaigns, since that’s the time I’m writing about.

These two soldiers are currently stationed at Fort Carson, but they were representing troopers from Fort Concho, Texas, during the Plains Indian Conflicts. 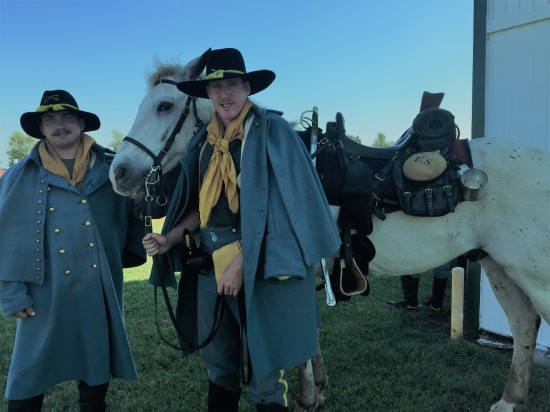 They are judged on the historical detail of their uniforms, weapons, gear, and tack. Finding these guys is a researcher’s dream! I learned that they would’ve carried more ammunition than food, but if you have ammo, usually you can get food. There’s not much room in those bags for fluff, but they liked having both a canteen and a tin cup.

And even though it was a toasty day, they favor the caped overcoat when they want to make an impression. I have to agree with them.

See the heart on the breast collar of the horse – 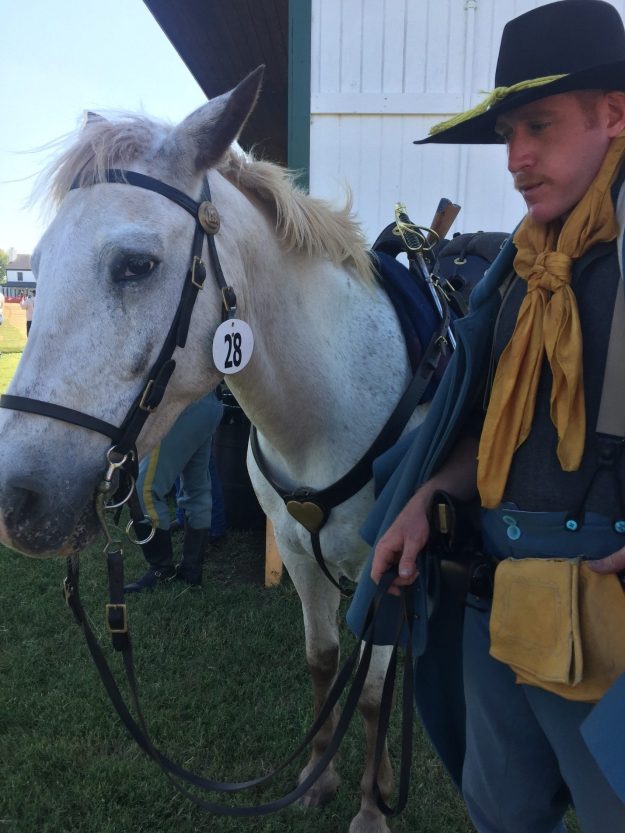 According to these presenters, the heart meant that the horse had already seen combat. Is that true? I haven’t found that referenced anywhere else, but I’m open to the possibility.

My meeting with these guys set up the moment that will always be one of my favorite writer memories– the time my book cover came to life. A member of their unit was competing in the Mounted Saber course, when I realized that it was a scene straight out of my book The Lieutenant’s Bargain (releasing Dec. 4th). 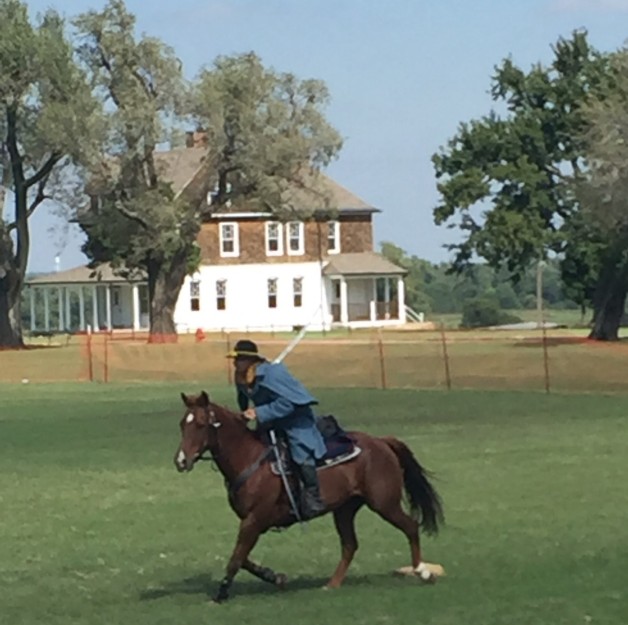 See that house behind him?

See the house on my book cover? 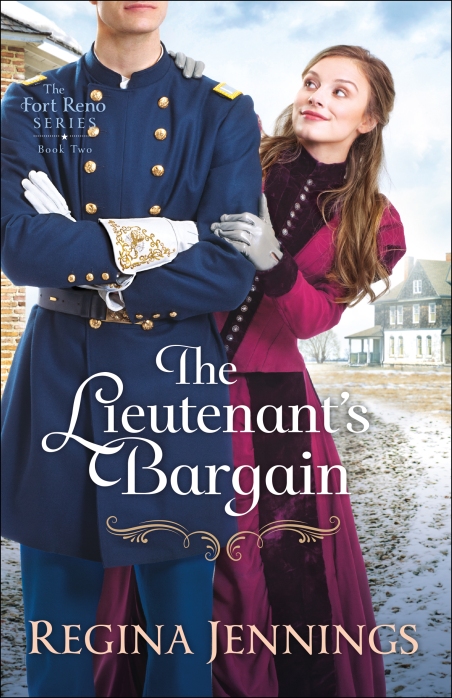 It’s the same! And while Lieutenant Jack isn’t wearing his caped coat on the cover, you’d better believe it’s a big part of the story!

I’m so grateful that our military encourages their young members to keep the legacy of their units alive through events like this, and I’m doubly grateful that they choose to hold the contests at historical sites. I’d imagine if walls could talk, the buildings at Fort Reno would say that they miss the rowdy cavalrymen and the spirited horses that used to populate their grounds.

There’s just something right about bringing the cavalry back to Fort Reno.

Thanks, Regina! And readers, if you haven’t been introduced to her Fort Reno series, now is the perfect time…the ebook of Book One, Holding the Fort, is on sale for $1.99 for October 2018. Check it out! 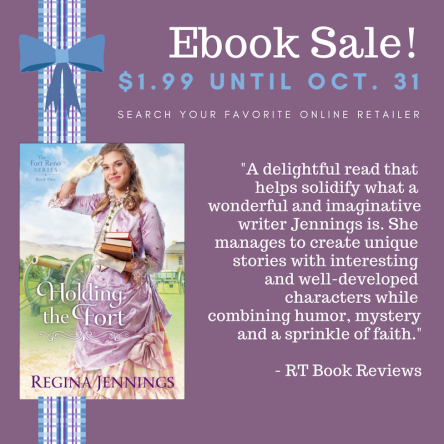 Have you ever visited a place that was also the setting of a favorite book? What similarities did you notice?

One thought on “Guest Post: When a Book Cover Comes to Life by Regina Jennings”