Time to talk series! Obviously, each book in a series should be a complete story with a satisfying ending, but after that, there are many different kinds of series. Are they connected by one central protagonist, a family, a setting, or a chain of historical events? Do they have a thread of unresolved suspense that leaves you waiting anxiously for the next release date, or are all the plot questions resolved by the last page?

For Bethany House, August was a month that does a good job displaying different kinds of series. Of the books listed below, The Artisan’s Wife is closing out a trilogy with a similar cast of characters, the McKay family, but with each story following a different protagonist. A Tapestry of Secrets is not technically in a numbered series, but it gives us a sense of closure about some of our favorite characters’ future—and past. Where Hope Prevails is the conclusion to Beth Thatcher’s journey in the Canadian frontier. And A Heart Most Certain is the first in a series set in the same town, each featuring the love story of one of the women there.

To get a behind-the-scenes peek into the making of these novels, the authors share a few more details about the place this entry has in the series as a whole, and how it came about. (And, as usual, click on the cover if you want to read an excerpt.) 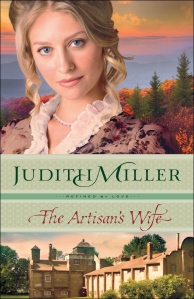 Judith: In this final book of the series, one of Ewan McKay’s twin sisters, Ainslee, takes center stage as the protagonist. All of these books have been centered around clay deposits in the state of West Virginia. The Artisan’s Wife depicts yet another use of those clay deposits: the family’s newly acquired tile works. As in the previous books in this series, the McKay family is confronted with issues that threaten to fracture the family. As the story unfolds, it looks at the issues of genuine forgiveness and the ability to consider change a positive factor in our lives.

Sarah: The mystery that’s lingered since Miracle in a Dry Season is the identity of Sadie’s father. My favorite part of writing this latest novel, A Tapestry of Secrets, was going back to the 1940s and revealing that secret by telling Perla’s story. Anyone who’s read the previous books knows she had a child out of wedlock, but how that unfolded was never discussed. So many readers wanted to know about little Sadie and what happened to her later in life. Not only will they find that out, but they’ll also learn who her father was—something Sadie herself is conflicted about discovering.

Melissa: This book was actually the one I was editing in hopes of putting it out on submission when Bethany House contracted A Bride for Keeps. Now, all I thought I’d have to do was finish editing where I left off, but I had grown as a writer over the course of the Unexpected Brides series, so I had to rewrite some things as well. Be sure to keep a lookout for secondary characters in A Heart Most Certain—some will be featured in the next romances of the series, set in the same town.

Laurel: Because this is a collaboration with the television movie and TV show which derived from Mom’s book When Calls the Heart, we grafted a new branch into her first Elizabeth Thatcher’s family tree for this novel. These new characters weren’t mentioned in the original series of stories, but we made Beth a much younger cousin to the woman she refers to as “Aunt Elizabeth.” In Where Hope Prevails, Beth wrestles with her internal struggles and sense of calling…but readers will leave with a sense of completeness about what God has for her future.

Readers, do you have a favorite go-to series that you read and re-read?

One thought on “One Good Book Deserves Another: August New Releases”