Readers, I have some shocking news for you, something that’s never before happened to anyone at Bethany House. Take a look at the letter below that Dani Pettrey received in the mail, just before the launch of Sins of the Past. 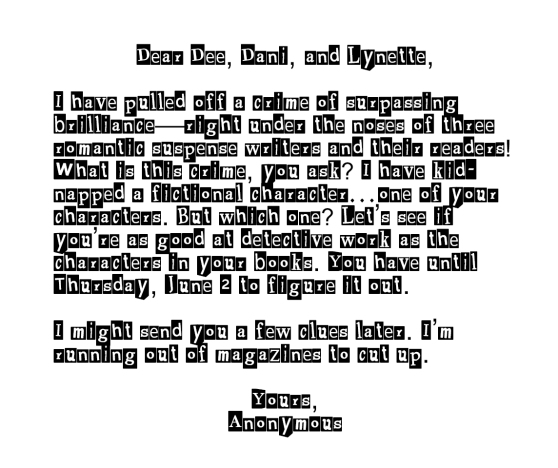 Enclosed with the note was a list of profiles of these three authors’ characters. Apparently Anonymous has been stalking their books for quite some time. We can only assume the “clues” Anonymous promised to reveal will help rule out some of the characters below.

From: When A Secret Kills by Lynette Eason
Occupation: Investigative reporter
Most Likely to Be Found: Hiding from a killer who wants her dead, spending time with her daughter Meg

From: Sabotaged by Dani Pettrey
Occupation: Veterinarian, owner of a shelter for rescued sled dogs
Most Likely to be Found: Caring for animals, snowshoeing, or cross-country skiing

From: No One To Trust by Lynette Eason
Occupation: Former Special Forces
Most Likely to Be Found: Doing something for his wife, Summer, or helping someone in need

From: Blackout by Lynette Eason (novella in Sins of the Past)
Occupation: Paramedic
Most Likely to Be Found: At work or driving an ambulance

From: Undetected by Dee Henderson
Occupation: Navy commander
Most Likely to be Found: At work on a submarine, reading a good mystery

From: Shattered by Dani Pettrey
Occupation: Co-owner of Last Frontier Adventures
Most Likely to be Found: Reading a mystery novel, traveling, planning a party with friends

From: Always Watching by Lynette Eason
Occupation: Bodyguard
Most Likely to Be Found: At work since she doesn’t know what it means to relax

From: Stranded by Dani Pettrey
Occupation: Co-owner of Last Frontier Adventures
Most Likely to be Found: Cooking, kayaking, practicing the trumpet or the piano

What Can You Do?

My name is Amy Green, the fiction publicist at Bethany House, and I’m appointing myself the investigative lead on this mystery. I can’t do it alone, though. It’ll take a team to solve the mystery, rescue the character, and bring the kidnapper to justice. That’s why we want you, dear readers, to join us. We’ve already recruited the help of bookstore owners and book review bloggers to help us find clues to determine which character is being held hostage and how we can rescue him or her. The stops on the tour are listed below. Make sure you don’t miss a single step of the investigation!

The Mystery and Mayhem Tour

Clues will be revealed at each stop to help you figure out which character has been kidnapped. (If you can’t make it in person to the bookstore events, don’t worry—Dani and Lynette will post the clue from the events on their Facebook pages within 24 hours of the event.)

Wednesday, May 4
Just Commonly with Annie

Wednesday, May 11
Reading is My Superpower with Carrie

Wednesday, May 18
Finding Wonderland with Rissi

Saturday, May 21
Will Bake for Books with Bekah

Wednesday, May 25
The Suspense Zone

Thursday, June 2, 7-9 PM Eastern
Sins of the Past Mystery and Mayhem Facebook Party

Be sure to RSVP to the Facebook party on June 2—if enough concerned readers show up, we’re hoping Anonymous will make an appearance as well so we can solve the case. Don’t worry: with a team of loyal readers like you, we’re sure we’ll get the character back safe and sound!

23 thoughts on “Sins of the Past Mystery and Mayhem Tour”