A few months ago, Becky Wade wrote a blog post called “Ten Secrets Authors (Almost) Never Tell.” It was such a fun glimpse into writers’ lives that I thought I’d do something similar for Bethany House. So here are a few secrets from life working at a publishing company…don’t tell!

One: It’s common to see red pen corrections on email messages, charity flyers posted on the fridge, and even notices in the bathroom. When you’re surrounded by editors, it happens, people.

Two: During cover design meetings, when choosing between poses of models, certain members of the team will suggest humorous captions for what the models are thinking, or attempt to imitate the facial expressions. (I considered snapping undercover photos to document this practice, but I think the parties involved wouldn’t appreciate that.)

Three: Whenever there are weapons used on the cover of a book, and thus lying around the office, a certain fiction publicist who writes this blog always has to go inspect them. And sometimes takes them into meetings, because who’s going to disagree with you when you’re holding a sword? 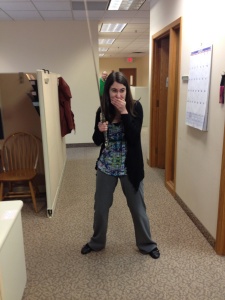 From Patrick W. Carr’s The Shock of Night.

From Lynn Austin’s Keepers of the Covenant (we ended up using a bow and arrow instead of the spear).

Four: There is a sharp divide, particularly in the marketing department, between cat people and dog people. (I was actually asked to take a side during my interview.) Once, I tried counting the number of cat items in our marketing vice president’s office. I gave up at 80.

Five: Different employees have authors who they are a big fan of…and then they meet with that author in person or over Skype and they have to focus and be professional instead of just gushing about their books and asking for an autograph.

Six: We have a…lovely traveling felt art piece that goes into the cubicle/office of the newest employee. Whenever someone new is hired, it appears as a welcoming present for their first day. There are many legends surrounding its origin, but it is mostly shrouded in the mystery. And sequins and 70s-style orange. 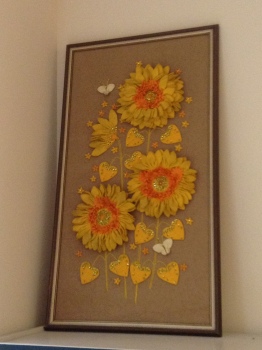 Seven: There have been lunch table conversations where a good portion of the time was spent discussing which classics of literature don’t deserve their classic status. And another day where we all talked about our favorite punctuation mark. (Mine’s the em dash, in case you wanted to know.)

Eight: Some of the models on our book covers are actually Bethany House employees or family members in disguise. 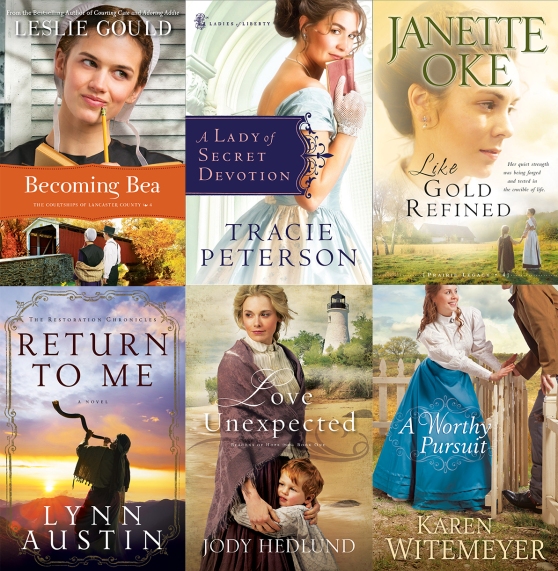 The top row is Dave, one of our fiction editors (the Amish man in the bottom scene); Sarah, his wife and also one of our fiction editors at the time; and their oldest daughter (the little girl in the corner). In the bottom row, we have Dan, one of our designers; the son of Donna from our rights/legal department; Carissa, also from our rights/legal department (and the other model is her husband!).

Nine: Several of us spend more time thinking about and filling out paperwork for our free book perk (we can choose a certain number per year) than we do actual benefits like health insurance and 401Ks.

Ten: Although things like the points above make our jobs seem fun to readers, in reality a lot of it is pretty tedious and routine, like any other job. But even on the days when we’re doing more boring work, we can be excited about the end goal of getting great books into the hands of readers like you.

There you have it…the inside scoop! Feel free to ask any questions about life at BHP in the comments.