You’ve probably watched book trailers—short “teasers” made to give you a quick visual glimpse at upcoming books. This week on the blog, we have Torrey Sharp of Faceout Films, the film production company Bethany House uses to create some of our trailers. He answered a few of my questions to give us a behind-the-scenes look at what goes into the creation of a book trailer. 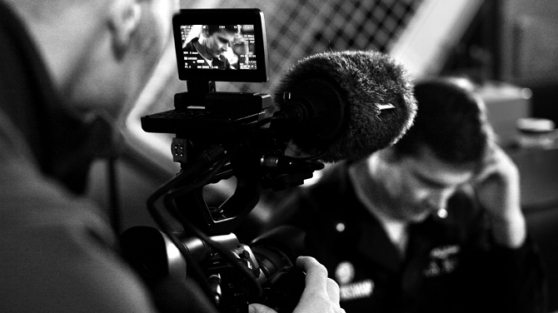 Amy: How are you able to direct the actors in the trailers in a way that gets them to convey the personalities of the characters in the book?

Torrey: Before we cast talent for a production, we make every attempt to understand the story line and characters. We do this by reading the manuscript and talking with the publisher and/or the author. If we’re casting for a speaking role, we hold an audition and might listen to 15 to 25 actors read for the part. This gives us a great idea of who might be best to fill a role and who might fit the character’s description the best.

Once the publisher has selected an actor, we spend a lot of time ensuring they have memorized the script, understand the story and character, understand the storyboards, and are clear on all the production day details. We make every effort to accommodate our talent on set. We want them to be as relaxed as possible and remain in character when the cameras are rolling. When on set, we usually shoot lots of footage, getting various takes from the actors so we have several options in post production.

Amy: About how many hours go into creating a two-minute trailer?

Torrey: This is a good question. The short answer is . . . a lot. Preproduction usually takes 2 to 3 weeks. Our production days are usually around 12 to 16 hours, then postproduction can take a couple weeks.

In preproduction, we work on the following: casting, script writing, storyboarding, location scouting, wardrobe and prop acquisition, art direction, and then of course all the planning for production day with film crew, make up and hair, sound team, permits, craft services, etc.

In postproduction, we edit the footage, working on details such as custom composing the piece, color grading, sound design, voiceover if needed, motion graphics if needed, and finally output the final cut so it’s ready for distribution.

Amy: One of the recent trailers that Faceout Films created for us was for Dee Henderson’s Undetected.

Where did you go to film this trailer?

Torrey: Fortunately, we were able to secure permission from the Oregon Museum of Science and Industry to film on the USS Blueback, which is docked at their museum. They allowed us to film in and around the submarine, which was the perfect backdrop to the story. We had wardrobe custom made with USS Nevada insignia, since this was the name of the sub in Dee Henderson’s book. This particular sub was one of several used in the film The Hunt for Red October, a 1990 Paramount Pictures production.

Amy: What was the biggest challenge of creating this trailer?

Torrey: The biggest challenge in shooting on the sub was working in such a tight space. We had to limit ourselves to a smaller camera package and smaller film crew. The opening title sequence also took a lot of work in postproduction.

To watch more Bethany House book trailers, stop by our YouTube channel. And as you do, think about all of the hours and professionals involved in making that two-minute clip that brings a book to life!

What’s a book you’ve read recently that you’d love to see turned into a full-length movie?

One thought on “Behind the Scenes of a Book Trailer”