(Congratulations to our winner from last week’s post, Martha J. Sturm! Martha, please email your mailing address to me, Amy, at agreen@bethanyhouse.com so I can send you a copy of A Match Made in Texas.)

Last Friday, we went to the West to find out what courtship looked like on the American frontier. But, even though set in a similar time period, Elizabeth Camden’s novels have a very different feel. Set in cities like Chicago, Boston, and Washington D.C., they portray a different kind of love story than one set on a ranch or in a small Western boom town. Here, Elizabeth shares the unique challenges of romance for her heroines. 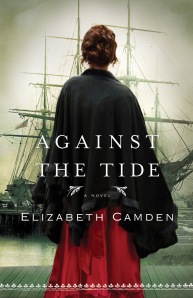 Title and Setting: Against the Tide and With Every Breath, late 1800s Boston and Washington D.C.

My Question:
What about the relationship in your novel was typical of the time period and what was atypical?

Elizabeth’s Answer:
The American Civil War brought a surprising opportunity to American women. As men left to fight in the war, the government hired thousands of women to fill office vacancies in Washington, D.C. Even after the war, the floodgates had been opened and it was acceptable for American women to obtain respectable white-collar jobs in cities all over the United States. By 1891, there were 70,000 women working in offices, and by 1920 that number had swelled to half a million.

As a romance novelist, this presents an irresistible temptation for me. Although “dating the boss” is taboo in today’s society, in the late nineteenth century women who ventured into the workplace were considered fair game. Sometimes they welcomed the attention of their employers and sometimes they didn’t, but there was no law against workplace sexual harassment until the landmark Supreme Court case of 1974, Barnes v. Train, recognized this as a distinct issue.

I’ve always been fascinated by the professional woman of the nineteenth century, and most of my novels feature heroines working in professional capacities.  In Against the Tide, Lydia was a translator for the Navy when she met a man who does undercover work for the government. It wasn’t a terribly risqué plot, since Lydia never reported to Bane and could walk away from him whenever she wished.

The Boston Custom House where Lydia and Bane often interact with each other, from Elizabeth’s Pinterest board.

I got a little more daring in With Every Breath (August 2014). This is a hospital drama, and Kate is a government statistician who is hired by a doctor to help with his research. Kate reports directly to Trevor, and both are well aware of the risks associated with getting romantically involved. “Dating the boss” added a delicious layer of tension and complication to the plot, one which I wouldn’t be free to explore were I writing a contemporary romance. Over the years we have too much instinctive suspicion of relationships that begin with such a disparity of power, but this is a twenty-first century attitude, and I write nineteenth century characters. Trevor and Kate are smart enough to be aware of the emotional danger of their relationship, but it hardly stops them from pursuing it.

If you’re curious about professional women in the late nineteenth century workplace, I hope you’ll take a peek at one of my novels!

For a chance to win Into the Whirlwind, comment below with your thoughts on this question: what event or time period would you most like to see as the setting of a historical novel, and why? The winner will be announced in next Friday’s post!