(The third in a series of posts highlighting some fictional characters who I want to be more like during the new year. Check out past spotlights on Gage McKenna and Brandy Phillip.)

“Look, son,” his father said to Poppy before she could take him away. “When you reach my age, you sit here waiting for the Lord to take you, and you look back on your life. It’s all you’ve still got—and you count yourself lucky if you can do that
. . . . Don’t let ‘em make you do something you’ll sit here and regret.” 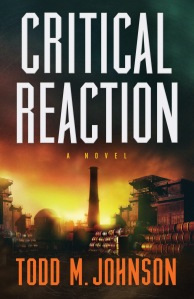 Character Description: Hanford security guard Patrick “Poppy” Martin is a man of modest size but solid stature. He is “grounded,” both in faith and personality; the kind of man who puts principle and truth ahead of expediency. It is a quality in people, men or women, that quietly but naturally garners love and respect. In the book, that respect and affection are evident in Poppy’s relationship with his children, his wife, his colleagues on the job and in the union, and eventually the lawyers who come to represent him.

Todd’s Reaction: Poppy was particularly patterned after a man with whom I worked on a street crew during the summers when in college. He was universally liked and respected for the “Poppy” qualities he brought to the job every day, including serving as a mentor for an orphaned worker who was under him.

Amy’s Reaction: I absolutely loved the character of Poppy. He’s an average working-class guy who would rather just go about his life in a familiar routine . . . but when that doesn’t happen, he certainly rises to the occasion. Without going into much detail and spoiling the plot, I will say that I actually cheered out loud for him during the final chapters. I’d love to be more like him, especially in his stubborn refusal to compromise his principles.

Related Scripture:
“Be on your guard; stand firm in the faith; be courageous; be strong.”
—1 Corinthians 16:13 (NIV)

Todd M. Johnson has practiced as an attorney for over 30 years, specializing as a trial lawyer. A graduate of Princeton University and the University of Minnesota Law School, he also taught for two years as adjunct professor of International Law and served as a US diplomat in Hong Kong. He lives outside Minneapolis, Minnesota, with his wife and daughter. Visit his website at www.authortoddjohnson.com.

Who is (or was) an older person in your life who served as a mentor or an example of who you wanted to be someday?