(The second in a series of posts highlighting some fictional characters who I want to be more like during the new year. Check out last week’s spotlight on Charlotte Graham.)

This was the type of training where, in the past, Brandy had been most prone to cheat. Push not quite as hard as she could during the first half, try to save a little something for later. . . . Not today. Today she was going to give everything she had. Maybe if she endured enough pain she could at some point forgive herself, at some point quit kicking herself for throwing away the closest thing she’d had to a friend in a long time.

Character Description: Brandy is a troublemaking teenager from the get-go. She also has an absurd natural talent for running . . . and a childhood that no one would envy. She makes mistakes over and over, and yet she keeps getting up off the ground and trying again.

Kathryn’s Reaction: I admire Brandy because she has some compelling excuses to quit, and although she plans to quit on several occasions, she never does. In spite of the fact that “life has been completely unfair,” she’s still pressing forward. She makes some wrong decisions, and she has unknowingly let bitterness take root deep inside her, but she perseveres. She inspires me to keep going—even after I’ve blown it. Again. And again. And again.

Amy’s Reaction: Even though Brandy started out in the story as a tough girl who couldn’t care less what anyone thought of her, I liked her from the start. I could see that she was a fighter coming from a difficult background, and that what she really needed was someone to look up to. And it made me wonder: how many people around me are like Brandy? How many people do I judge by appearances without really getting to know them?

Related Scripture:
“Not only so, but we also glory in our sufferings, because we know that suffering produces perseverance; perseverance, character; and character, hope.” —Romans 5:3-4 (NIV) 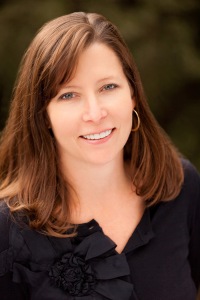 Kathryn Cushman is a graduate of Samford University with a degree in pharmacy. She is the author of five novels, including Leaving Yesterday and A Promise to Remember, which were both finalists for the Carol Award in Women’s Fiction. She is also the co-author of Angel Song with Sheila Walsh. Kathryn and her family currently live in Santa Barbara, California. Visit her website at www.kathryncushman.com.

Who comes to mind first when you think of someone who you’d like to imitate in the coming year (fictional, historical, or someone you know personally)?