Christmas is a favorite time of year for me.  I’m a winter girl, and I love the cold weather.  The snow, the crispness of the air, the anticipation of the season—I love it all. Living in Montana I can almost always count on a white Christmas, and nothing shines so bright as Christmas lights against a snowy backdrop. One of the things I love to do is set up my holiday village and the Christmas tree.  I like to get them up early and enjoy them for as long as I can.  Another neat decoration is the Nativity I was given by my good friend and sometimes co-writer, Judith Miller.

The Nativity is quite special to me.  I remember having a tiny plastic one as a child.  I can even remember when we had a Nativity in my public school classroom and no one protested—guess I’m telling my age.  But these days, the Nativity is a family affair.

Around Thanksgiving, I set it up, starting with Mary and Joseph and baby Jesus.  Next I add the sheep and shepherds and an angel on top of the stable.  We don’t usually put in the wise men, since they weren’t actually at the manger scene.  However, a great many other “visitors” show up before Christmas arrives.

My husband and son started the tradition of adding other characters.  Batman appeared, along with some marines—one is standing guard over the Christ child.  My husband, being fond of bunnies, added several of those creatures in various sizes, as well as Abraham Lincoln, Han Solo, and Chewbacca. Later came a tank parked atop the stable along with a walrus.  And after that a cowboy with rifle ready and penguins appeared.  We even had a dragon one year. As time went by, the Nativity became a pretty crowded place.  I thought it humorous to see what my guys might add.  By the time Christmas rolled around, the Nativity had a bevy of extra people and animals. 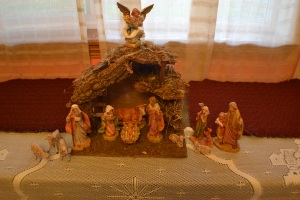 As the season concluded, I packed up the Nativity and put it away, commenting that it was fun and silly seeing all the extra folks at the manager.  My husband said it wasn’t silly at all.  It just went to show that all of creation worships Jesus, or one day will.  That has stuck in my mind and found a place deep in my heart.  All of creation—every knee will bow and every tongue confess that Jesus Christ is Lord.  The wonder of that truth makes my Christmas just a little merrier.

Who would you add to the manger scene? Does your family have any fun, slightly-silly Christmas traditions? 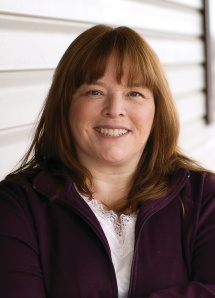 Most Recent Release: The Miner’s Lady

When Chantel’s sister falls in love with a sworn enemy, will Chantel’s attempts to aid the couple result in a romance of her own?

6 thoughts on “Every Knee Will Bow: Tracie Peterson”