Christmas! My favorite season of the year. I love baking Christmas cookies with my kids and distributing them to neighbors. I love the Department 56 Dickens Village I display every year. I love the Christmas Eve service at church, hanging ornaments on the tree, Christmas cards, and—you get the idea—a thousand other things about Christmas. But my favorite tradition, by far, is our family nativity play.

My grandmother had the gift of hospitality. She adored people and adored hosting them in her home. One Christmas Eve, early in her years as a grandmother, she (or one of her daughters) decided that the grandkids should put on a homemade nativity play for the adults. This was the result:

That’s me (at the age of five) in the hip mint-green mini skirt, starring in the role of angel. My two cousins and two sisters also had roles, though it’s debatable how much my youngest sister (who was one year old at the time and is being held aloft on the left side of the picture) contributed to the performance.

It was a humble beginning. But it was a hit with both kids and adults. Our family has put on the play every year since.

This next photo is from a few years later. I’m Mary this time, probably because this was one of those thrilling banner years when a real baby was available to play the part of Jesus. It looks as though the baby needed a bottle in order to make it through the performance, likely because of the odd way I was holding him. Note the good-natured dads who’d been roped into participating and my older cousin on the right who’d grown bored with the proceedings and decided to read to pass the time.

Several years later my family was traveling through Wales with another family over the holiday. We didn’t let that stop us. The nativity play had become such an integral part of our Christmas Eve celebration that we convinced our friends (and their dad!) to take part in the play. That’s me in the turban. We’re smiling hugely because we got our hands on another real baby!

When my sisters and cousins and I entered our awkward middle and high school years, we grew “too cool” for the play. We would have skipped it had anyone asked us our opinion. No one did. It had come to mean so much to my grandmother that she and her daughters insisted it continue.

In the photo below we had more warm bodies . . . uh, actors . . . than we were usually blessed with. I’m the one on the far left with the eighties hair and black-and-white-check bubble skirt. I’m not in costume, because early in my high school years I became the play’s director and narrator. Which was, by the way, a foreshadowing of my future career as an author of fiction. All these years later, I’m still directing and narrating characters’ stories. 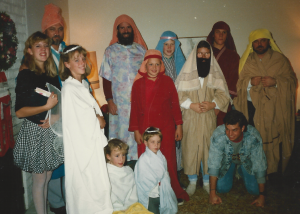 My grandmother passed away in 1997. Every Christmas, we have continued the play in her honor with our own children—the great grandchildren she never got to meet—as Mary, Joseph, the angels, shepherds, and wise men. Here’s a shot of the nativity play from last Christmas featuring the next generation: my children, my sister’s children, my dad, and my husband.

The play is simple. As you can tell, we don’t have fancy costumes. The entire production takes no more than ten minutes. But it reminds us, on Christmas Eve, right when we most need to be reminded, exactly why we celebrate the holiday. At the end of the play, all the participants kneel around baby Jesus, the One at the center of the season, and everyone in the room sings “Silent Night.”

It’s a sweet family tradition. It’s our tradition. It makes us laugh. It reminds us of our grandmother. It reveals to us that time passes, but some things remain.

May God richly bless you and your family this Christmas!

Does your family visit a live nativity or attend a nativity play at Christmas time? 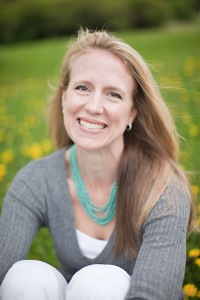 Most Recent Release: Undeniably Yours

When Meg inherits her father’s thoroughbred farm, she’s determined to shut it down, despite Bo, the handsome manager. Can he—and love—change her mind?